Docker 1.11: The first runtime built on containerd and based on OCI technology

We are excited to introduce Docker Engine 1.11, our first release built on runC ™ and containerd ™. With this release, Docker is the first to ship a runtime based on OCI technology, demonstrating the progress the team has made since donating our industry-standard container format and runtime under the Linux Foundation in June of 2015.

Over the last year, Docker has helped advance the work of the OCI to make it more readily available to more users. It started in December 2015, when we introduced containerd ™, a daemon to control runC. This was part of our effort to break out Docker into small reusable components. With this release, Docker Engine is now built on containerd, so everyone who is using Docker is now using OCI. We’re proud of the progress we’ve made on the OCI with the 40+ members to continue the work to standardize container technology.

Besides this mind-blowing piece of technological trivia that I’m sure will impress your friends at parties, what difference does it make to you? Well, short answer is: nothing… yet! Nevertheless, let me convince you that this is still something you should be excited about.

This is among the biggest technical refactorings the Engine has gone through, and our priority for 1.11 was to get the integration right, without changing the command-line interface or API. However, this lays the technical groundwork for significant user-facing improvements. 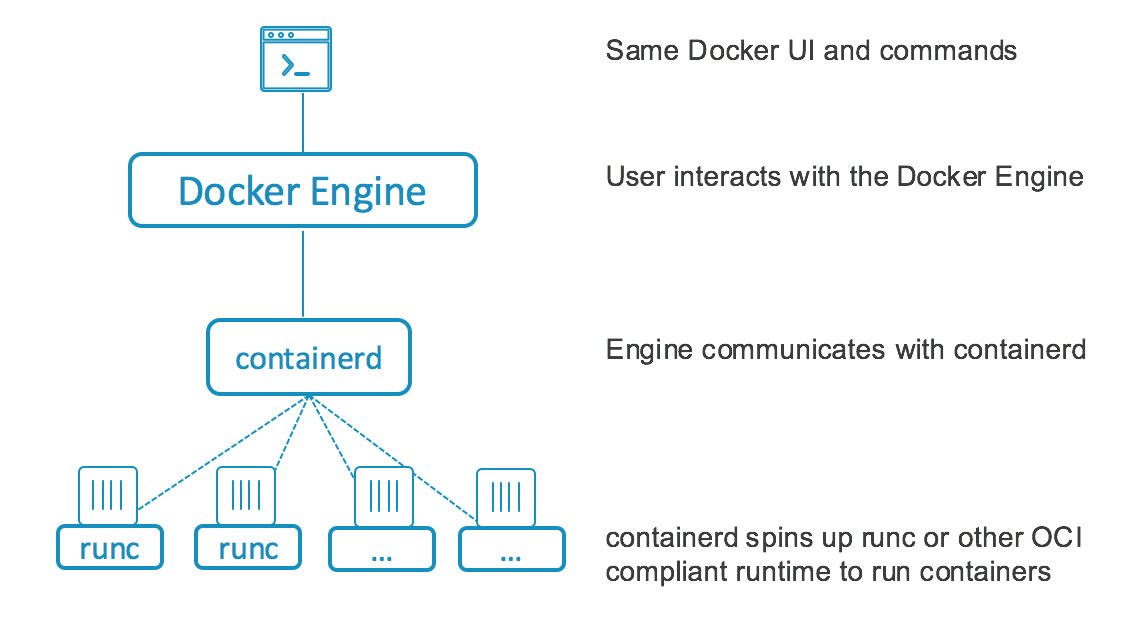 With the containerd integration comes an impressive cleanup of the Docker codebase and a number of historical bugs being fixed. In general, splitting Docker up into focused independent tools mean more focused maintainers, and ultimately better quality software.

Performance-wise, we were extremely careful in making sure 1.11 would not be any slower despite the extra inter-processes communications. We’re pleased to say that it is faster at creating containers concurrently than its predecessor, and although we made a deliberate choice of favoring correctness first, you can expect more performance improvements in the future.

runC is the first implementation of the Open Containers Runtime specification and the default executor bundled with Docker Engine. Thanks to the open specification, future versions of Engine will allow you to specify different executors, thus enabling the ecosystem of alternative execution backends without any changes to Docker itself. By separating out this piece, an ecosystem partner can build their own compliant executor to the specification, and make it available to the user community at any time – without being dependent on the Engine release schedule or wait to be reviewed and merged into the codebase.

What does this mean for you? This gives you choice: the runtime is now pluggable. Following  the Docker principle of batteries included but swappable, Docker Engine will ship with runC available as the default with the ability to choose from a variety of container executors that are for specific platforms or have different security and performance features. By separating out the thing that runs containers from the Engine, this opens up new possibilities. As an example, 1.11 is a huge step toward allowing Engine restarts/upgrades without restarting the containers, improving the availability of containers. This is probably one of the most requested features by Docker users. In fact, with this new architecture, you will even be able to restart containerd and your containers will keep running.

In addition to this huge architectural change, as usual we have also added a bunch of features in Engine, Compose, Swarm, Machine, and Registry.

In this version of Machine, the Microsoft Azure driver now uses the new Azure APIs and is easier to authenticate. See Azure’s blog post for more details. There are also a bunch of other improvements in this release – take a look at the full release notes for details.

The easiest way to try out all of this stuff in development is to download Docker Toolbox. For other platforms, check out the installation instructions.

All of this stuff is also available in Docker for Mac and Windows, the new way to use Docker in development, currently in private beta. Sign up to get a chance to try it out early.

Announcing #Docker 1.11: First runtime built on #containerd and based on OCI technology

4 thoughts on "Docker 1.11: The first runtime built on containerd and based on OCI technology"